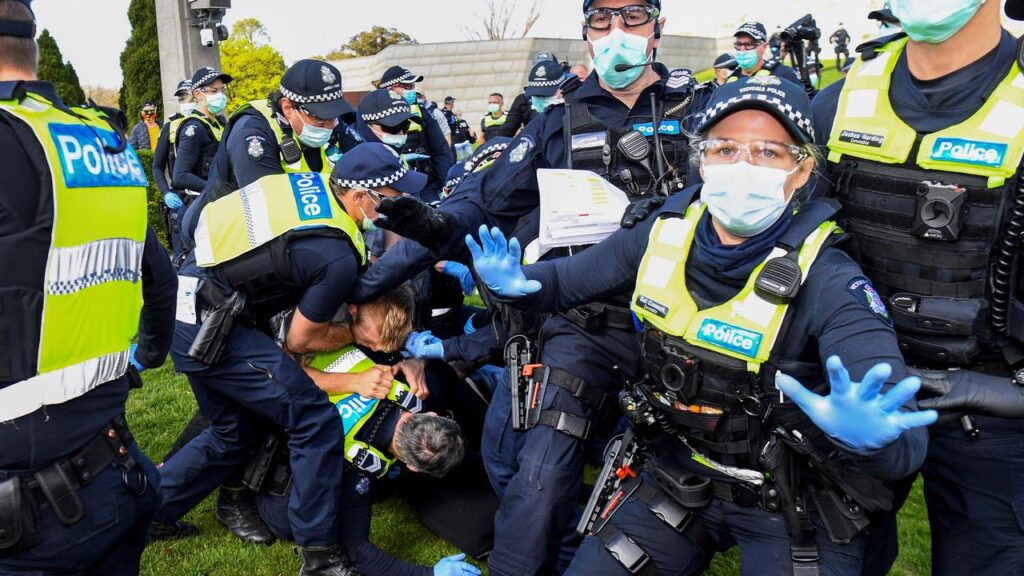 Australia has locked down 7 million people in the state of Victoria after 26 people tested positive for COVID-19.  The rulers will “allow” people to leave their homes for food, exercise, or to get jabbed with the experimental gene therapy.

The state’s acting premier James Merlino announced the new weeklong “circuit breaker” lockdown on Thursday, telling reporters that the fresh outbreak would become “increasingly uncontrollable” in the absence of “drastic” action. So the drastic action necessary is slavery. It has become quite alarming that the Australians have not figured out the game yet.

Schools will also be closedd for the week, while in-person weddings, funerals, and religious gatherings are set to be barred entirely.

We’re dealing with a highly infectious strain of the virus, a variant of concern, which is running faster than we have ever recorded,” Merlino said during a press briefing in the state capital of Melbourne.  These new restrictions come after 26 cases that are linked to a viral strain first detected in India cropped up in Victoria over the last week, 12 of them reported overnight between Wednesday and Thursday. That brought the state’s active case count to 34.

So let’s do some basic math. Because of 34 “active cases” and “26 positive tests,” 7 million people were just enslaved only allowed to do what their master will let them do. Additionally, Merlino said that more than 10,000 people had been identified by contract tracers as needing quarantine after potentially encountering one of the new patients, predicting that figure “will continue to grow and change” in the coming days, according to a report by RT.

New lockdowns are popping up all over the globe, and if they believe they can get away with it here, expect another here.

It is Victoria’s fourth lockdown since Covid-19 emerged on the world stage in late 2019. The new round of restrictions will take effect at 11:59 pm local time on Thursday night, forcing millions of residents to remain home for seven days with the exception of urgent travel for “necessary goods and services,” “authorized work” or health reasons. Even then, Victorians were urged to remain within 5km (three miles) of their homes. –RT

The ruling class is blaming a “lack” of a mass vaccination program on the statically negligible active cases (36 out of 7 million is a rounding error.)

Victoria’s vaccination drive was recently extended for residents aged 40-49, after previously allowing immunizations only for those older than 50. Merlino, however, lamented a lagging campaign earlier this week, saying “we might be facing a different set of circumstances” had doses been rolled out faster. To date, just shy of 400,000 shots have been administered across Victoria, with less than 63,000 residents fully vaccinated.-RT

Stay alert and aware of what’s going on.  Stay prepared so you do not succumb to irrational fear. Lockdowns continue to pop up everywhere over statically negligible numbers so stay ready for anything. The ruling class’s ultimate goal is not just slavery, but a permanent enslavement of which there is no escape. Wake up and continue to ask questions and use your critical thinking skills.