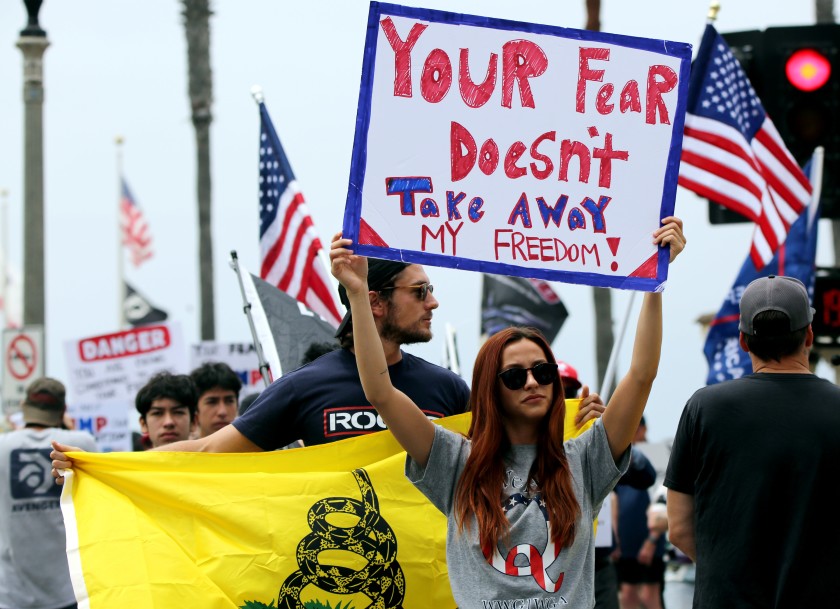 Over the past couple of weeks a trend has become apparent in the state of Idaho, specifically in Moscow, Idaho in Latah County. The city council of Moscow has issued a mandatory mask order, and they are using police to enforce it. Bizarrely, the city had ZERO deaths from Covid at the time the mask order was instituted, meaning their action was in response to…nothing.

Idaho has had a total of 500 deaths from Covid since the beginning of the outbreak. To put this in perspective, the state also has around 400 deaths from diabetes every year, and 250 deaths from the flu/pneumonia according to the CDC. Perhaps they should ban sugar, and make masks mandatory for the flu as well, just to be safe…

The residents of Moscow are not too happy with the city council attempt to unilaterally enforce such mandates. Church congregations in particular are fighting back by holding outdoor services without masks. The city has responded by ARRESTING the pastors of any church that dare to defy mask laws.

First, it is not surprising that Latah County is one of the ONLY counties in Idaho that leans to the far-left politically, and the majority of the city council of Moscow is made up of leftists. Moscow is also the home of the University of Idaho. It seems wherever the political left sets up shop, constitution violating mandates on the coronavirus are prevalent. Even if a state government is predominantly more conservative and less antagonistic on lockdowns, left leaning city and county officials have decided they are going to enforce their own restrictions anyway.

Second, the mask rules are being used against people who held meetings outdoors, and this is something I am seeing all over the world right now. Why is the science of virus behavior in outdoor open air environments not being discussed AT ALL in the mainstream? Why is no one talking about the fact that open air and UV rays from sunlight KILL microorganisms? The chance of contracting the coronavirus outdoors is next to zero, yet mask rules are being strictly instituted from Melbourne, Australia to New York, New York to Moscow, Idaho.

Government officials must surely be aware that the science contradicts these orders. And if this is the case, then this only confirms that such restrictions are not about saving lives; they are about control.

Third, the use of targeted arrests against organizers of group events is clearly an attempt to frighten the public into compliance without confronting their concerns directly. The goal is to encourage self censorship and to manipulate citizens to avoid public assembly without coming out openly and saying “We are banning public assembly”. It’s an end-run around the constitution, and these actions are increasing in the US.

As I have noted in past articles, I have been watching the draconian coronavirus measures in Australia and New Zealand very closely. My concerns rest on the other side of the world because what I see happening there is perhaps a beta-test for high intensity lockdown restrictions in other western nations including America.

Restrictions in these countries are rooted in what they are calling “Level 4 lockdowns”, and include mandatory mask orders (even outside), mandatory social distancing, bans on public assembly, church closures, citizens are not allowed to travel more than 3 miles from home (essentially people are under house arrest, with only one hour per day outside to exercise), people who contract the virus or are suspected of being infected can be locked up in Covid camps for as long as government officials deem it necessary, and in New Zealand these camps are managed by the military.

People speaking out against the lockdowns online are being arrested for “incitement”. Free speech in Australia is nearly dead.

I believe the establishment of medical tyranny is moving so quickly in Australia because the vast majority of the population has been disarmed and they have limited means to fight back. It’s an easy place to test out control measures. Protests are taking place, but without a means of self defense the citizenry is at the mercy of government and law enforcement. If the government wants to crack down violently on anti-lockdown groups, there will be little the public can do to stop them.

What I see happening in places like Moscow, Idaho is the initial stages of medical tyranny similar to what is happening in Australia. What I see is an incremental form of totalitarianism, and it simply cannot be tolerated.

We have heard it often during this pandemic event that we are “all in this together” and the lockdowns are “serving the greater good”, but this is nonsense. The constitutional rights of public assembly and freedom of religion in particular are being stifled, and these rights ARE the greater good. They are far more important than the lives of the select few people who are susceptible to the virus.

No virus is worth this. It would not matter if we were talking about the Black Plague. Ultimately, though, Covid affects a very small portion of the US population. The real solution to the pandemic is simple:

The people who are most susceptible should voluntarily stay home and quarantine, and the rest of us should get on with our lives with an open economy and normal constitutional rights. Why is this option not being presented?

Mask laws in particular are truly bizarre. There is little evidence that cloth masks are effective in the slightest, but the idea that “everyone must wear a mask” in order for the masks to work reveals the true nature of the restrictions.

If your mask is useless unless I also wear a mask, then the masks we are wearing are not offering much protection and their enforcement should be questioned. The fact that numerous states and counties across the US have had infection spikes even with strict mask mandates suggests to me that the masks are pointless. Even the CDC questions the effectiveness of cloth masks and recommends N95 masks for healthcare workers until there is some evidence that cloth masks function.

If the CDC doesn’t believe they work very well, then why are people even wearing them, and why are people being arrested for refusing to use them? Again, the science does not support the mandates, so they must be about control rather than saving lives. If you can get a population acclimated to having the government involved in the smallest intricacies of their lives on a daily basis then freedom goes out the window and the establishment enjoys total power to do whatever they please.

Don’t get me wrong, if a person WANTS to wear a mask, or take other precautions no matter how dubious, then I have nothing bad to say about them. That is their decision. If a business wants to require masks before entering, then that is also their right as property owners. I can choose to not shop there if I don’t like it. But it is not anyone’s right to attempt to force others to comply with their baseless rules just so they can personally feel safer. If I’m not wearing a mask and you don’t like it, then don’t come near me; it’s very easy.  As leftists like to say:  My body my choice.

Take note of how many instances we have seen so far of Mask Nazis physically attacking people not wearing masks. Isn’t this the exact opposite of what they have been preaching?  Also take note that Mask Nazis tend to be avid supporters of BLM and Antifa mobs that ignore pandemic restrictions.  Again, they don’t care about health issues, they are angry because you are not submitting to their control.

Another terrifying development during the pandemic is the use of executive orders and executive authority to initiate restrictions without public oversight. Here is the bottom line: No government, whether it be federal, state or local, has the power to violate your constitutional rights. Period. If a law or executive order tramples on the Bill of Rights, then it is automatically null and void and should be defied. National emergencies do no supplant the constitution, regardless of what statists might claim.

Executive orders in particular are based on nothing other than color of law. In most cases they do not legally apply to the citizenry, only to government employees. Real laws are passed by the legislature, and are often added to a ballot to be voted on by the public. No governor, mayor, city council or president has the authority to assert new laws without oversight like a dictator.

The political left has been quick to point out these facts whenever Donald Trump issues executive orders, yet they are also quick to defend those orders issued by states and cities to enforce unconstitutional and illegal lockdowns.

In the end, whether you respect the Bill of Rights or not, laws are meaningless unless they are backed by principles. A law that is immoral and unjust should not be followed. Government representatives that abuse their positions to assert powers that are not granted them by the constitution should be unseated. The coronavirus changes nothing – Not a thing.

I would suggest that anyone who lives in a place that is trying to enforce restrictions that are contrary to the Bill of Rights act now to disrupt what is likely an incremental march towards medical tyranny. If you don’t stand in opposition to these actions now, they will only grow over time until a majority of people become conditioned to accept them.