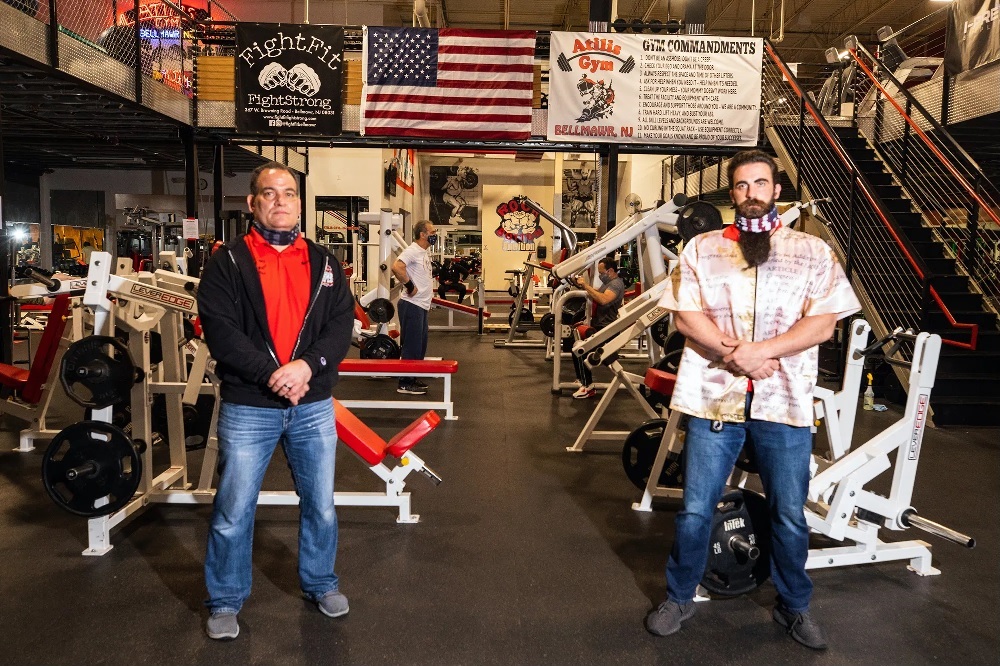 Nearly 100,000 US businesses on Yelp failed to survive the coronavirus pandemic and ensuing government lockdowns. Ian Smith, the co-owner of Atilis Gym, was determined not to be one of them.

The New Jersey entrepreneur has defied Gov. Phil Murphy’s lockdown orders for months now. On a typical day hundreds of people go to the gym to exercise, and Smith estimates 84,000 people have worked out at the facility since the state resumed its lockdown in May.

For gym patrons, Smith’s lockdown defiance has brought benefits. They get to keep body, mind, and soul fit in what has been a stressful and strange year, and Smith claims not a single COVID-19 case has been traced to his facility.

For Smith and co-owner Frank Trumbetti, however, the decision has had consequences.

“Governor Murphy has thrown everything he possibly could to shut us down. He has arrested my partner and I, given us over 60 citations, some of them criminal. He fines us $15,497.76 per day for every day we’re in operation,” Smith recently told Fox News. “Our fines are totaling over $1.2 million, but every single day, Frank and I open our gym.”

The prospect of facing more than a million dollars in fines and criminal charges is enough to cow most business owners into compliance. Not Smith.

Following his interview with Fox, he posted a short video clip to Twitter showing people working out in his facility and had a simple message for Governor Murphy: “No Science. No Shutdown.”

“I was not born to be forced. I will breathe after my own fashion.”
– Henry David Thoreau pic.twitter.com/5wbbkahnGR

The clip has already been viewed more than 7.7 million times on Twitter alone as of Monday morning.

Smith is hardly the only business owner to defy lockdown orders. As I wrote before Thanksgiving, Americans of all stripes—business owners, religious observers, and even political officials—are embracing the tradition of civil disobedience and peaceful resistance to lockdowns that have been shown to be largely ineffective at slowing transmission of the virus.

From city officials in Beverly Hills, to restaurants in Kentucky, to gym owners in Buffalo, New York, Americans have begun to stand up to lockdown orders that have ravaged small businesses and caused the first rise in extreme global poverty in decades.

A Dark Year—With a Silver Lining?

The pandemic has been one of the most trying and terrible chapters in American history. More than 300,000 Americans have died of or with the virus, according to official statistics, and attempts to mitigate the spread of the virus have resulted in widespread economic destruction and mental health deterioration.

But a silver lining is that Americans are witnessing a renaissance of civil disobedience against government overreach. From seatbelt laws, to compulsory schooling, to smoking bans on a private property and beyond, in recent decades Americans have obediently acquiesced to laws that have violated individual freedom in the pursuit of an alleged collective good.

The lockdowns, however, have reminded Americans of the true nature of government.

“The essence of government is force, and most often that force is used to accomplish evil ends,” the late economist Walter Williams once observed.

By complying with laws that seem reasonable in the pursuit of a common good, Americans had largely forgotten that government is an evil—a necessary one, perhaps, but one that should be limited and shackled at every turn to prevent it from devolving into tyranny.

This is precisely why the American founders created a fractured system of government that decentralized power and was fortified with numerous checks and balances.

“An elective despotism was not the government we fought for; but one in which the powers of government should be so divided and balanced among the several bodies of magistracy as that no one could transcend their legal limits without being effectually checked and restrained by the others,” Thomas Jefferson wrote in Notes on the State of Virginia.

To be sure, the coronavirus is a serious and deadly threat. But it’s one individuals must manage, not central planners.

“Substituting democratic decision making for what should be private decision-making is nothing less than tyranny dressed up,” Williams once said.

Depriving healthy individuals of the ability to work or do commerce is tyranny—even if it’s wearing a dress.

Ian Smith sees that, and his defiance against Murphy—whose clumsy attempts to slow the virus have only resulted in New Jersey having the highest COVID-19 mortality rate in America—is an act of heroism.

Hopefully his act of civil disobedience will inspire others to remember man’s true nature and natural rights.

“I was not born to be forced,” wrote Henry David Thoreau, the American poet, abolitionist, and essayist. “I will breathe after my own fashion.”