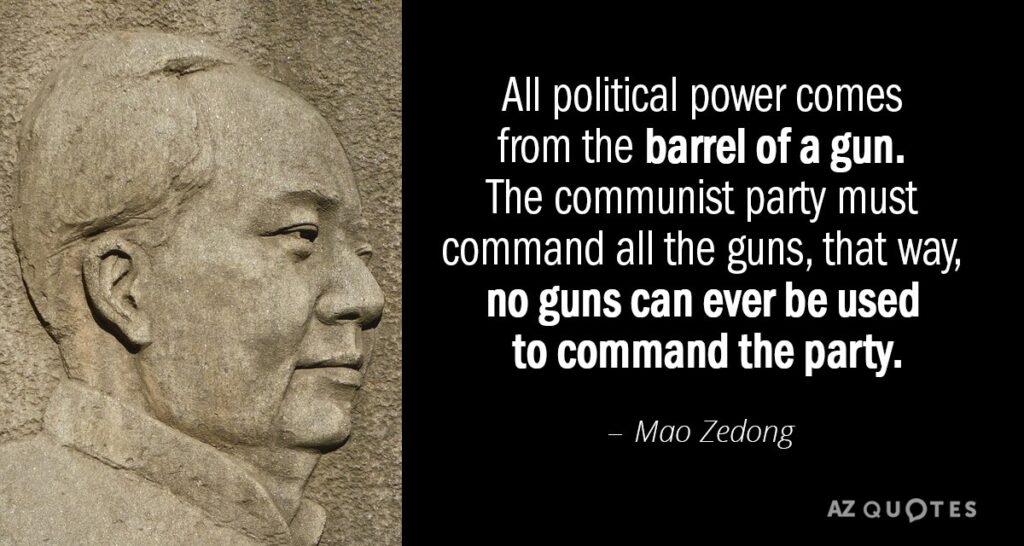 This past week a US District judge in California struck down the state’s 30 year ban on high capacity semi-automatic rifles which leftists label “assault weapons”. The judge called the ban unconstitutional (which it is). In response, the progressive media has lost their collective minds, screeching in horror at the idea of AR-15 rifles being legal within the borders of their carefully manicured socialist Utopia state. Their most commonly expressed reaction seems to be fear.

Fear is rarely a rational thing. When someone operates based on fear they tend to make terrible decisions and support oppressive causes and laws. Fear leads to an obsession with control. Fearful people also tend to look for large mobs of other terrified people so they can feel safe and secure and anonymous. They want to be able to act impulsively on their fears without having to face consequences for it later.

Leftists are driven primarily by two factors: Narcissism, and yes, fear. I’ve discussed their narcissism at great length in past articles; now I think we should delve into their fear.

The most common leftist retort to the question “Why are you so afraid of the AR-15?” will usually be a snort of indignant disbelief followed by the words: “Because it’s a military weapon designed to kill a lot of people quickly…idiot!”

But this is not an argument, it is an expression of irrational fear. Why are they, as individuals, afraid of the AR-15? What are the chances that they will EVER be faced with a person intent on killing them with an AR-15? And, why do they believe that disarming innocent law abiding Americans will somehow save them from their paranoia?

Let’s examine the first issue of statistical probability; how many people are actually killed by AR-15s each year? Not many according to the FBI, which does not track the stats on specific rifles, but does track the stats on all rifles together. And, as it turns out, only around 6% of all gun deaths involve rifles in the US each year.

How much of that 6% involves the use of military grade rifles like the AR-15? It’s impossible to say, but even if it was half, or 3% of all gun related crimes, that would still mean you have FAR more of a chance of being murdered by a knife or blunt object than an AR. By extension, Rifles overall are dwarfed by handgun murders, so, again, why are leftists so afraid of the AR-15?

What about mass shootings? It seems like the AR-15 is a favorite among mass shooters because of it’s “efficiency”, so is this reason enough to be fearful? According to the New York Times own analysis, the AR-15 was used to kill 173 people in mass shootings in the US from 2007 to 2017. Meaning around 17 homicides per year over a decade can be attributed to the rifle. Again, the AR is dwarfed by almost all other weapons in homicide including knives, even when accounting for mass shootings.

With the sheer number of military grade weapons in the hands of civilians in the US there should be mass homicides everywhere you look if you take the common position of the typical progressive gun grabber. But, this is not the case. In fact, if you want to increase your chances of being killed by a gun, move to a major Democrat run city like Chicago, New York or Philadelphia. In Chicago, there were 4033 shootings and 784 homicides, predominantly in black neighborhoods and primarily with handguns.

So, statistically, access to AR-15s does not increase gun homicides. But what about living in a black neighborhood in leftist run Chicago under some of the strictest gun laws in the country? Yes, your chances of being shot are MUCH higher (just not by an AR-15).

Since the math does not add up in favor of the leftists, perhaps we should examine other factors that might be driving them to focus on the AR in particular. Let’s talk about “precedence”…

Look at it this way – States like California are a petri dish, a testing ground for the future that leftists want for the entire country. There is an old saying that “As goes California, so goes the US”, and this is because California is often where most experimental legislation is pushed; legislation that violates the boundaries of what the constitution allows. Sometimes it’s New York or New Jersey or some other blue state, but most of the time CA is where unconstitutional precedents are set. Its massive population and large number of electoral votes make it a perfect target for conditioning the wider public to further restrictions on their freedoms.

This explains some of the fear the media is showing regarding the latest federal court decision on military grade weapons like the AR. Political elites see California as their own little kingdom with their own special laws, and they plan to eventually spread those laws across America using California as the model. But, if such laws are overturned as unconstitutional, then the precedent actually works in reverse. Now, the leftists are concerned that an overturned gun ban in CA means more blue states will follow and their entire gun grabbing scheme will go out the window.

The leftist mind thinks in terms of unchecked and unhinged “democracy”. Meaning, they believe that the majority is paramount; the majority is law. If a majority in a society wants to take away your freedoms, then they have the right to because they have the mob on their side. 51% rules over the lives of the other 49%. But this is not how things work in a Constitutional Republic.

Under the Bill of Rights your freedoms are codified and sacrosanct. They are inherent and gifted by God (or whatever you happen to believe in); government has no domain over these rights. The right to firearms and self defense is one of these inherent qualities. It does not matter what the State of California thinks, or even what the “majority” of people in California think. If an American in California wants to own an AR-15, then he/she has the right to own an AR-15.

We also cannot ignore the fact that leftists have an insatiable appetite for collectivism, usually in the name of the “greater good”. Collectivism is basically totalitarianism disguised as humanitarianism. They know what’s best for you, and they are going to make sure you follow THEIR plan for your life.

The AR-15 is indeed a military grade weapon, and maybe this is what frightens leftists the most. Not because they are personally more likely to be shot by one (we’ve already proven that notion false), but because leftists desire control over all else, and with military grade weapons in the hands of the public control becomes much more difficult. ALL totalitarian governments seek to first disarm the people they intend to enslave or destroy. This is a fact.

When a group of people in power are working hard to remove defensive or even offensive weapons from your hands, it’s best to assume that their intentions are malevolent. They are not trying to help you, they are trying to help themselves.

It’s not really surprising that they want to disarm us as well.

Of course, they will claim that this argument is “silly”. After all, what can an AR-15 do against an Apache helicopter or a Abrams battle tank? Well, these rifles in the right hands can do a hell of a lot to stop a technologically advanced military, as we have seen for the past two decades in Afghanistan. Let us not play games; there is a reason why leftists and elites are obsessed with our disarmament. If military grade rifles were not a threat to them, then they would not be going after them so aggressively.

Finally, the mainstream media has rolled out all the typical propaganda tools when it comes to spinning the federal decision in CA, including attacking the judge and his character. Almost every single article on this issue focuses on the fact that the judge compared the AR-15 to a “Swiss Army knife”.

The left will continue to use this narrative as a means to distract from the real problem at hand because false conflations and straw man arguments have worked for them in the past. Clearly, the judge was not trying to say that an AR-15 and a Swiss Army knife are exactly the same, or that they are equally capable of killing people. The logical interpretation is that the AR-15 is a tool like any other tool, and it has multiple uses. It is a utilitarian object, not an inherently demonic death machine as leftists would have us believe.

Gun grabbers love to make the argument that firearms are only designed for one purpose: “Killing”. This is a lie. They are also tools for self defense. They are a means to defuse a violent situation before it even happens. There are thousands of videos on the web showing people with criminal intent running away from a Good Samaritan with a gun. There is no way of telling how many potential victims have been saved by the mere presence of a firearm, but the accounts are documented and numerous.

This is on top of all the other uses for guns, including hunting and sporting uses. So, yes, the judge is absolutely correct; an AR-15 is a multipurpose tool, just like a Swiss Army knife.

In my view, the gun control lobby in America is in the midst of a considerable decline, and maybe it is even about to die. The political left has long operated on the mantra that “the squeaky wheel gets the oil”. In other words, they think if they whine long enough and loud enough about an issue someone will come along and give them what they want just to shut them up, even if what they want is illogical or morally bankrupt.

They can continue to lie, they can continue to threaten and they can continue exploiting emotional arguments, but they’ll NEVER get the guns. And, as we have seen recently, we might even start returning some of those gun rights and rifles to states like California, where fear was used to cloud the public mind and people were conned into compliance.

What are California leftists and their comrades in other blue states really afraid of? They are afraid that their strategies are failing, that the public is getting wise to their games, that their incrementalism only works for so long, that their true intentions have become transparent, that their narcissism has blinded them to their own frailties, that the law is not their plaything and that every piece of constitutional ground they have stolen over the decades could be taken back from them in the blink of an eye; as fast as a speeding bullet.

Leftists and totalitarians fear the AR-15, but what they fear more is what it represents. And with each carefully placed practice shot at every gun range across America, they hear the crushing sound of inevitability.