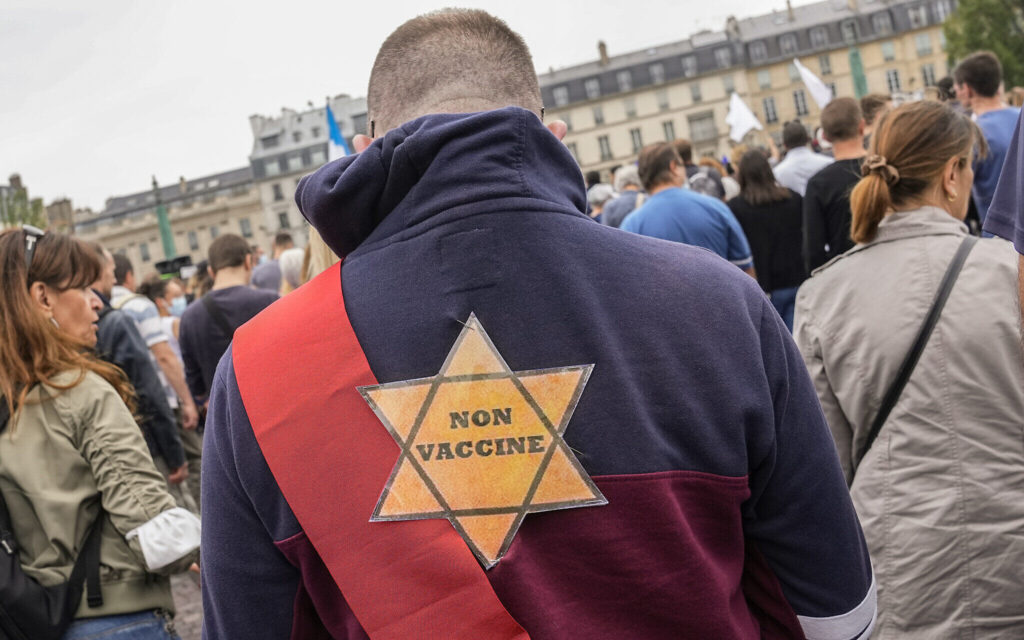 It’s an odd dynamic – One would think that if the covid vaccines were a generally benevolent program that actually “followed the science” then there would be no need to pile drive the public with an endless barrage of vax propaganda. After all, if science and morality are on the side of the covid cult then the rest would naturally take care of itself and the overwhelming majority of Americans would have already voluntarily taken the experimental mRNA cocktail without any threats required. And, if some people still refused, then the science would dictate that it doesn’t matter, because if the vax actually works then those people present no threat whatsoever to the rest of society.

It is highly revealing that this is not the case, and the more resistance the establishment encounters on mandates the more aggressive they become and the more they lie about the facts and evidence.

They claimed that the vaccination programs were a success with between 70% to almost 80% of the public taking the double jab, and that was a lie as state numbers continue to contradict federal and CDC numbers.

They claimed that the only pandemic still ongoing was a “pandemic of the unvaccinated”, and this was of course a lie as we have seen studies from multiple states and mostly vaccinated countries showing that the vaccinated now make up the bulk of infections and hospitalizations.

Lie after lie after lie. If the vaccines actually worked, there would be no need for so much deceit, and if their true intention was to “protect public health” then the establishment would be promoting treatment programs and natural immunity, not untested vaccines that continue to disappoint.

Numerous fully vaccinated people including political figures like Colin Powell have died from covid but the mainstream media STILL claims this doesn’t disprove the efficacy of the jab. At the same time, unvaccinated alternative media figures like Joe Rogan beat covid in 3 days using treatments like Ivermectin, and the MSM attacks him relentlessly as some kind of charlatan merely because he dared to not die. The elitists think that the public doesn’t notice massive contradictions like this, but we do. We are not dumb, we see everything.

In Washington State, for example, studies show that there have been at least 51,000 “breakthrough cases” of covid in the past 10 months. Breakthrough cases are people who are fully vaccinated but were still infected with covid. Of those 51,000 people, 493 people died. When calculating the percentage of dead vs infected, we get around 0.96%. The median death rate of covid among unvaccinated people is only 0.27% according to dozens of peer reviewed medical studies. This means that the death rate of fully vaccinated people in Washington is actually HIGHER than that of unvaxxed people.

We have seen similar results in states like Massachusetts, where there were 5100 breakthrough cases in a single month and 80 deaths of fully vaccinated people, which is a 1.5% death rate for the vaxxed as opposed to 0.27% for the unvaxxed. Studies on death rates are going to have to take into account vaccinated deaths vs unvaccinated deaths from now on.

And what about studies from highly vaccinated countries like Israel, which show that the majority of infections and hospitalizations are among vaccinated people, with infections spiking well after the vaccines were introduced. Right after Israel became one of the most vaccinated nations on the planet, it also had one of the highest infection rates on the planet.

It should also be noted that the peak of US infections in 2020 ended well before the vaccine rollout even started in early 2021. Meaning, the vaccines did NOTHING to reduce infection rates. They dropped off on their own. This is a scientific fact that the mainstream avoids, just as they avoid admitting that the median death rate of covid is a mere 0.27%.

The solution that the establishment offers is not surprising – They claim we need MORE vaccines through booster requirements. As the old saying goes, insanity is doing the same thing over and over again and expecting different results. And so the demented propaganda machine continues into infinity.

The public is growing tired of the games as is evident in mass walkouts, sick-outs and other protests against Biden’s vaccine mandates for companies with more than 100 employees as well as most government institutions. We are seeing up to 50% of employees and government workers in many cases refusing to take the experimental jab despite the fact that they are being threatened with losing their jobs. This dynamic seems to have bewildered the covid cult and the globalists; they can’t wrap their heads around this level of resistance to their agenda.

It’s not a new thing, but I have noticed an increasing number of vax propaganda commercials and articles featuring Donald Trump in the past month. All of them herald Trump’s pro-vaccination stance, which is odd because leftists spent most of 2020 saying they would not take any vaccine that Trump was responsible for producing.

I was recently doing some research on YouTube and was annoyed to have to watch yet another vax ad, but this one had an odd tone. It showed clips of Trump making favorable statements on the mRNA vaccines, he and his wife taking the vaccines with dramatic music, and then a message at the end which said “There’s A Covid Vaccine Waiting For You, Too.”

The bizarre commercial was clearly aimed at conservatives, but it displays an obvious disconnect that the covid cult and the media have when it comes to conservative thinking and principles.

Leftists, collectivists and globalists function according to majority rule and herd mentality. They have gatekeepers, and the gatekeepers set the agenda and dictate decision making responsibilities for the group. Leftist herds wait patiently for top-down orders from their designated gatekeepers and most of them obey without question. This is how they operate.

Liberty minded people operate in the opposite fashion. Our “leaders” are always under scrutiny, and this includes political mascots like Donald Trump. This is why, during a recent speech in Alabama, Trump was booed by a crowd of supporters after he called for them to get the covid vaccine. Conservatives generally don’t care about the person promoting the message, they only care if the message passes the smell test.

Leftists and globalists are incapable of grasping conservative principles or the conservative mindset. This fact is hilariously evident in the style of propaganda they have consistently used to try to intimidate or pressure the conservative public into compliance with the mandates. We don’t view Trump as a philosophical leader; in fact, there were so many underlying issues with his cabinet and his policies that his leadership became suspect. At most, conservatives enjoyed Trump’s administration simply because his presence in the White House drove leftist authoritarians to greater madness.

We definitely don’t care what Trump has to say on the vaccines.

There is further evidence of the disconnect I describe in the actions of leftists and the establishment when it comes to vax mandates in the workplace. I can’t tell you how many times I have heard the argument from covid cultists that conservatives “Might say we will refuse to comply, but when our livelihoods are threatened we will submit.” They believe this because that’s how THEY would respond. They are cowardly weaklings with no heart, no principles and no morals. They think that since they would cave in to the pressure, the rest of us would cave in as well.

The past month has proven them oh so wrong as millions of people stage protests and walk outs across the country. There is even refusal among around 25% of the armed forced averaged across all branches, as well as up to 50% of city police forces. Most employers and government offices can barely function as is; there is zero chance they will be able to cope with a 10% loss of workforce, let alone a 25% to 50% loss. They would crumble.

This was obviously not the plan; the globalists were not prepared for this level of resistance in the US and this is evident in their pathetic propaganda scramble. That does not mean they don’t have contingencies in place. I am already seeing a fledgling narrative in the media which is implanting the idea that any breakdown of the system in the US will actually be the fault of the unvaccinated.

Biden has been a fervent culprit behind the narrative that everything from economic instability and supply chain problems to social divisions should be blamed on unvaccinated Americans. That’s right, the majority of these disasters started on Biden’s watch and because of his policies, but somehow WE are the real danger. Yes, the draconian mandates are illegal and unconstitutional and yes, mandates are not laws in any form, and yes, Biden and his handlers are acting like dictators and there is no reason to do anything they say. But, we are the bad guys. This is classic communist gaslighting.

Here’s an idea: Stop trying to enforce covid mandates and vaccine passports. Stop paying people to stay home from work with covid welfare bribes. Stop generating trillions of dollars in fiat stimulus from thin air to pay for even more useless programs we don’t need. Then watch how quickly stagflation, economic instability, the workforce shortages and most other problems in the US suddenly disappear. The unvaccinated are not the source of American distress, the globalists and errand boys like Biden and blue state governors are the cause. Remove them from the equation and America’s future looks much brighter.