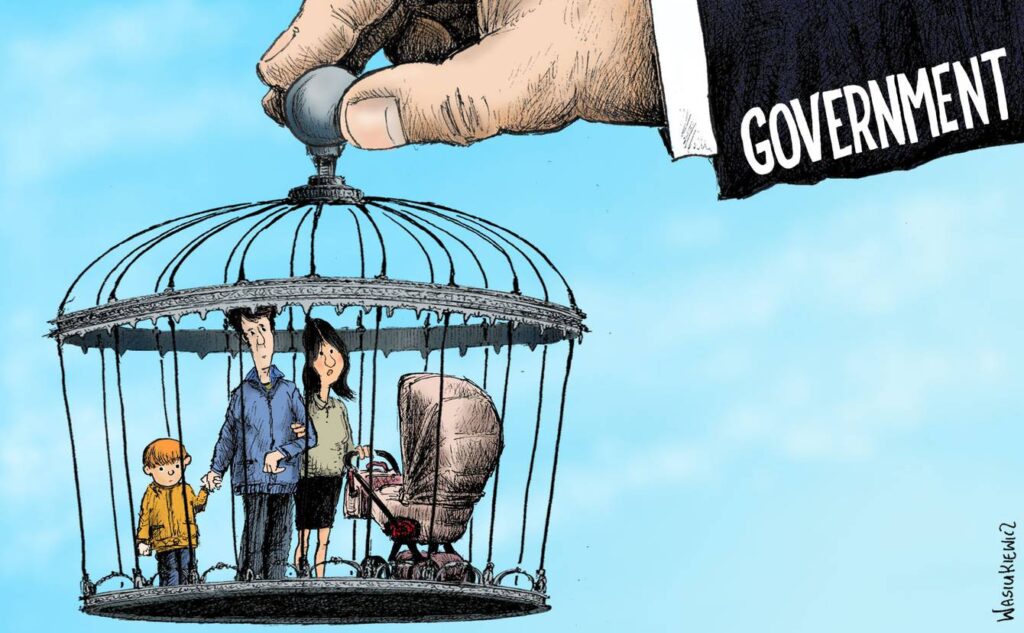 Governments around the world are using the ongoing pandemic to crack down on online dissent according to a human rights watchdog.

Washington-based Freedom House said dozens of countries have cited CV as a means “to justify expanded surveillance powers and the deployment of new technologies that were once seen as too intrusive.” They added that it marks the 10th consecutive annual decline in internet freedom, Barron’s reported.

The expansion of technological systems is enabling governments’ social control, according to the report.

“The pandemic is accelerating society’s reliance on digital technologies at a time when the internet is becoming less and less free,” said Michael Abramowitz, president of the nonprofit group.

“Without adequate safeguards for privacy and the rule of law, these technologies can be easily repurposed for political repression.”

China was singled out in the report noting, Chinese authorities “combined low- and high-tech tools not only to manage the outbreak of the coronavirus but also to deter internet users from sharing information from independent sources and challenging the official narrative.”

The report stated this shows a growing trend toward Chinese-style “digital authoritarianism” globally and a “splintering” of the internet as each government imposes its own regulations for citizens.

The report cited declines in countries where authorities have imposed internet shutdowns including Myanmar, Kyrgyzstan, and India, and in Rwanda for its use of “sophisticated spyware to monitor and intimidate exiled dissidents.”

Activist Post has previously reported that countries were using the pandemic to shutdown online dissent back in May of this year. Expressing that governments around the world were using fake news to hide behind their online censorship efforts. Hungary is one of the countries that began arresting citizens for allegedly spreading fake news related to the CV pandemic as ordered by Prime Minister Viktor Orban.

Hungary isn’t the only country that is using the CV crisis to push draconian laws on its citizens.  Activist Post previously reported early on during the CV outbreak that two individuals were arrested under Thailand’s new “Anti-Fake News Center” for spreading false information about the coronavirus. Malaysia also issued four arrests of its citizens for spreading rumors and “disinformation,” according to a report by Hong Kong’s South China Morning Post. Those “suspects” included a tutor, two pharmacy assistants, and a university student whom if found guilty will face upwards to a $12,000 fine and up to 1 year in prison if convicted.

Then there is China, which arrested 8 people who were charged with spreading rumors about a virus before the coronavirus was publicly known. Beyond that, China recently highlighted what can be done with such a law by censoring a media outlet Caijing, which is one of the most reputable outlets in the country. In that article, the authors claimed that China significantly underreported both cases and deaths, especially among the elderly. (archive) (translation)

Another country, Singapore, on April 1st proposed a law to combat online fake news. Under the draft law, those who spread online falsehoods with a malicious intent to harm public interest could face jail terms of up to 10 years,Reuters reported.

Activist Post previously highlighted that the CV pandemic would be used as a Trojan horse to take away our rights and be used to push increased digital surveillance via our smartphones. But that’s not all, it also serves a means for other facial recognition technology to be more frequently used. Top10VPN continues to monitor the increase of the police state and decrease of our digital and physical rights noting the following figures.

As Activist Post previously wrote while discussing the increase of a police surveillance state, these measures being put into place now will likely remain long after the pandemic has stopped and the virus has run its course. That’s the everlasting effect that COVID-19 will have on our society.  The coronavirus may very well be a legitimate health concern for all of us around the world. But it’s the government’s response that should worry us all more in the long run.