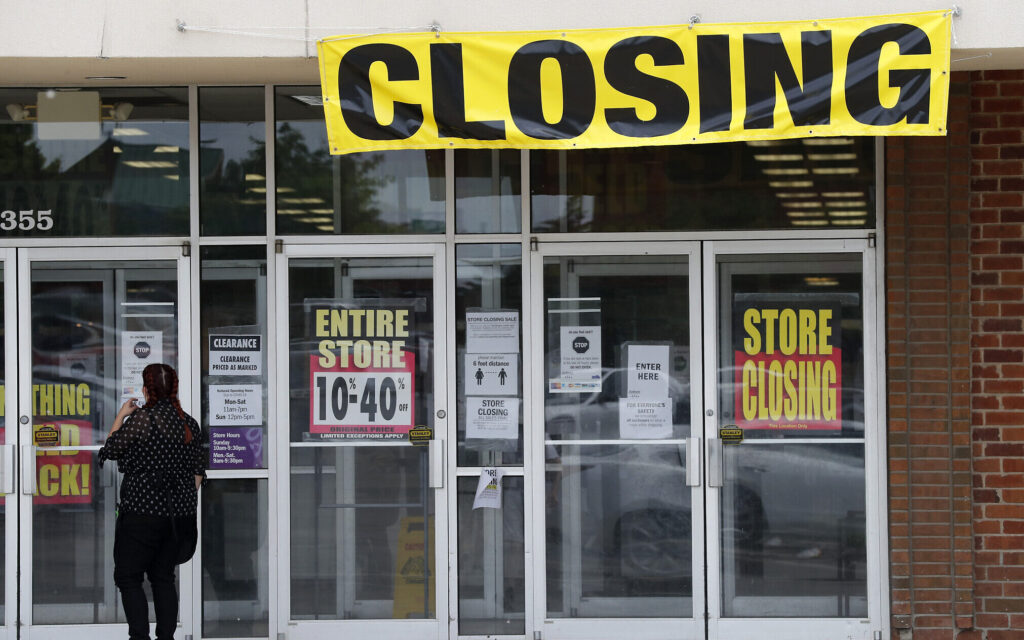 In the world of struggling businesses, debt defaults, bankruptcies, and closures, there is now a clear dividing line.

On one side are those businesses that got bailed out by the government, whether they needed it or not, such as the $25 billion in grants and loans for a handful of airlines, or the $525 billion in PPP loans handed to 5.2 million business entities, from minuscule to large, and some fraudulent. On the same side are businesses with access to the capital markets that got bailed out by the Fed whose corporate bond buying programs drove credit markets into frenzy, eager to fund nearly anything.

In September, another 54 large companies filed for bankruptcy, after 54 had already filed for bankruptcy in August, according to S&P Global Market Intelligence, bringing the total for the year as of October 4 to 509, the highest for the same period since 2010.

Energy companies were only in third place among the sectors with the most bankruptcy filings year-to-date. Here are the S&P’s top five bankruptcy sectors, with the number of filings so far:

The long list of chain-store retailers that have filed for bankruptcy during the Pandemic got longer in September with filings, among others, by off-price department store Century 21 (Sep 10), candy-seller It’Surgar (Sep 23), and Forever 21 (Sep 30).

Many retailers, when they file for bankruptcy, end up getting liquidated.

The Federal Reserve Bank of San Francisco, fretting about over-indebted companies becoming even more over-indebted during the Pandemic, said that the number of companies that have defaulted on their debt this year so far “is on course to be the highest since 2009.”

This type of filing occurs when a business attempts to restructure its debts while continuing operations, usually with shareholders losing the company, and with creditors taking it. Chapter 11 filings are seasonal, spiking during tax season in March or April. With the tax-filing deadline moved to July 15 this year, the spring spike stretched out over five months. And you would expect, given seasonal patterns, that filings would then taper off. But that’s not what happened.

In September, commercial Chapter 11 filings jumped by 78% year-over-year to 747 filings, the highest since the seasonal spike in March 2018, and beyond that the highest since 2012, according to data released today by the American Bankruptcy Institute. It was the seventh month of double-digit year-over-year increases. From March through September, commercial Chapter 11 filings jumped 40%, compared to the same period last year. Clearly, these companies didn’t get any bailouts:

A record number of small businesses “quietly” shut down (more on that in a moment), and many of the owners didn’t need to file for bankruptcy because the inflow of government cash allowed them to pay their obligations, work out a deal with the landlord, and shoulder the remaining burden. So commercial Chapter 13 bankruptcy filings plunged in April to just 332, the lowest in the ABI data going back to 2006, and have ticked up only a little since then, with 377 filings in September – an amazing sight during an economic crisis:

These filings by corporate entities, partnerships, and individuals (sole proprietorships) dropped in April to the lowest since 2015, and have since then zig-zagged higher, but remain low, with 1,503 filings in September. These types of businesses too were among the recipients of the PPP loans, if they continued operations; and most recipients of PPP loans didn’t file for bankruptcy. And many of the individuals who shut down their businesses were among the recipients of PUA benefits and the extra $600 a week and could pay off their creditors and shoulder the rest.

Consumer bankruptcy filings fell 36% in September, compared to a year ago, to 37,024 filings, as consumers were still flush with government stimulus money and the extra unemployment benefits of $600 a week through July, and the $300 a week for at least four weeks afterwards, much of which was processed late and arrived in lump-sum payments weeks or months late, therefore dragging into the fall. We have seen this stimulus money play out in record retail sales and record reduction in credit card debt.

From March through mid-July, over 420,00 small businesses – or 7.1% of all small businesses – permanently and quietly closed their doors, more than typically in an entire year, according to a study by Brookings, released in September.

The analysis found that “many small businesses are financially fragile and not equipped to weather a prolonged period of substantially reduced revenues”:

Small businesses account for about 99% of all businesses in the US and about 47% of jobs in businesses. If these 420,000 businesses are representative of national employment, “this means we have lost at least 4 million jobs that will only return with the creation of new businesses,” the report said.

Even if for the remainder of the year losses simply keep pace with those in previous years, we will see a doubling of the ordinary annual rate of small business losses to more than 700,000 (or 12 percent).

That likely optimistic scenario would see around 50 percent more business losses than at the peak of the Great Recession, and the largest loss of small businesses since records began in 1977.

This speaks of the large-scale damage to American businesses. While some businesses massively benefited from the crisis, many more took on heavy damage; and of them, many already shut down, and more will shut down – most of them quietly, and only some with bankruptcy filings.

And without all this stimulus and bailout money?

The biggest programs have ended: the PPP loans for smaller businesses, the Payroll Support Program for larger businesses, the extra $600 a week in unemployment benefits, and the extra $300 a week in unemployment benefits. President Trump, in a series of tweets just now, pulled the rug out from under bailout negotiations until after the election. So for now, it looks like businesses will have to deal with this economy on their own.