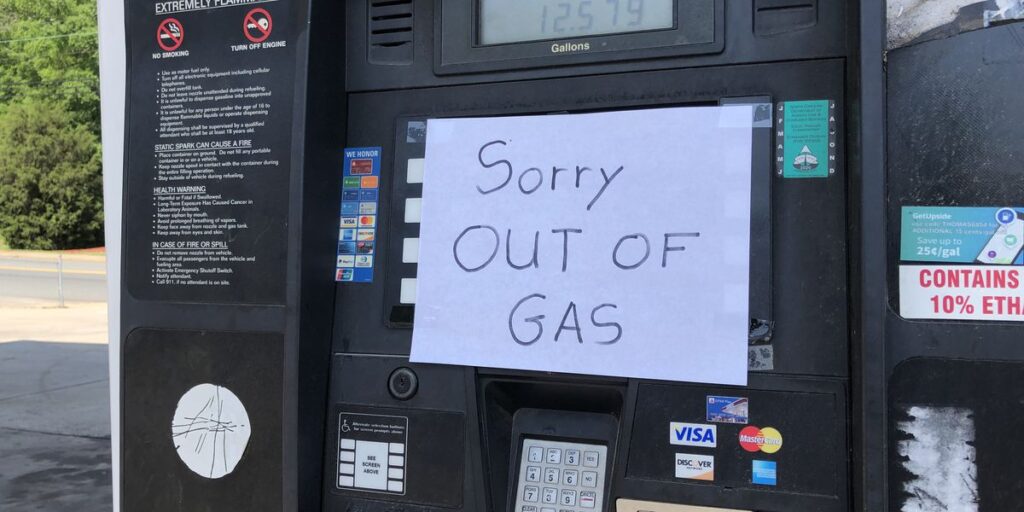 Mad Max drove around looking for gas. At least he was able to do that.

Many Americans  will wake up today to find they have no gas – or rather, that none’s available. Hard to drive around looking for it when you haven’t got any – and can’t get it, either. Which is also a function of not being able to pay for it – a problem Max never had.

Thanks to the “cyber attack” on the Colonial Pipeline by “Russian hackers”- in air quotes to emphasize the questionability of “cyber” whatever to do what is alleged to have been done (I have discussed this with some knowledgeable people in the business who tell me they smell a rat; that the story has all the ring of truth of a Fauci press conference) there is no gas at many stations along the east coast – especially the Carolinas and Virginia, where Gesundheitsfuhrer “Coonman” Northam just declared a state  of emergency (again) over not just the lack of gas but the Max Max behaviors the lack of gas might prompt.

The fuel shortage is probably temporary but – as with the weaponization of hypochondria – the damage may last longer.

Fuel price spikes are happening; I spent almost $70 filling up my old muscle car with premium (which it needs) which I may need, if the situation gets ugly.

I also fueled up all my five gallon jugs and my bikes and my truck. Looks like I’ve found some gazzuline. For now.

It may not be much, but it’ll keep me mobile, for awhile.

It’s not just cars that won’t move, either, when the pumps run dry. Food – and practically everything else people need – gets delivered by trucks that use gas (and diesel) and when these stop moving, the food and the rest stops showing up – and that’s when people tend to go Mad Max.

Keep in mind how they behave when the weather guy says a snowstorm is coming.

Well, it may be spring – but it’s going to snow.

But these are momentary concerns. The bigger concern is what it may mean if prices don’t go back down when the pipeline comes back online. This is entirely possible, for reasons that have nothing to do with the supply of gas, including the over-supply of “money” – as the arbitrarily-worth-something pieces of paper we keep in our pockets is styled. It may become worth less (and possibly worthless) at any moment, since these piece of paper are backed by nothing of value.

Just the “full faith and credit” of the government of the United States. Which is worth as much as the promises made by an AIDS-riddled, crack-smoking hooker. She’ll tell you anything – and so will Uncle. Who is far worse than AIDS in terms of his destructive capacity.

It is also in the interests of Uncle to keep gas prices high – in order to make the Green New Deal seem “cheap.” When gas is $5 – or $10 – per gallon, an electric car seems like a really sweet deal. Until you remember how much you had to pay for the electric car, which you probably can’t afford – even if Uncle gives you a $7,500 “tax credit” as an inducement.

But what will people do when they can’t afford to drive their paid-for, not-electric cars – which are currently very cheap to drive?

On Monday, I could full up my little ’02 Nissan Frontier’s 15 gallon tank for about $30. This constitutes my cost to drive the truck every day for a week, since the truck itself is paid for. That’s $120 per month, $1,440 annually – at Monday’s prices.

By Tuesday, the cost to fuel it had risen to nearly $40. That’s an extra $480 annually – about the sum received in “stimulus” last fall, with some pizza and beer money left over. Still manageable.

But everything changes if it rises to say $5 per gallon – which means $75 to fill it, which means $300 a month – which is almost a car payment, on a truck long since paid off.

This could well be what Uncle Joe is after.

A nudge – of people not stupid enough to trade in a paid-for not-electric car for the payments of a brand-new electric car, which Joe (and those operating the senescent puppet’s strings) want very much for everyone to drive – those who can still afford to drive at all – because electric cars are so much easier to control.

Debt being a form of that, by the way.

If you are in hock, you are under control. It is much harder to tell an employer who insists you Diaper or get Needled to go to Hell when you need the money because of all the bills you have. It much easier when you haven’t got them, because you don’t need the money – ipso facto, as Bill Cosby used to say.

Many people do not understand that electric cars are much easier to control because they are connected, via their umbilicus, to the centralized source of power – electricity – which the government can easily ration, as it likes and just like that.

Also, the EV is connected – literally, again – like a cell phone, to the company that made it. It receives “updates” over the air. These include adjustments to its charging/battery system, which can be tweaked for more – or less – range. Tesla did just that the year before the ‘Rona, when it sent out an update, giving the cars more range than they nominally had, to enable them to get away from the path of a hurricane; the same capability can be used to reduce the range, to zero – if your social credit is low.

Maybe we can connect the dots. Before it’s too late, ideally.