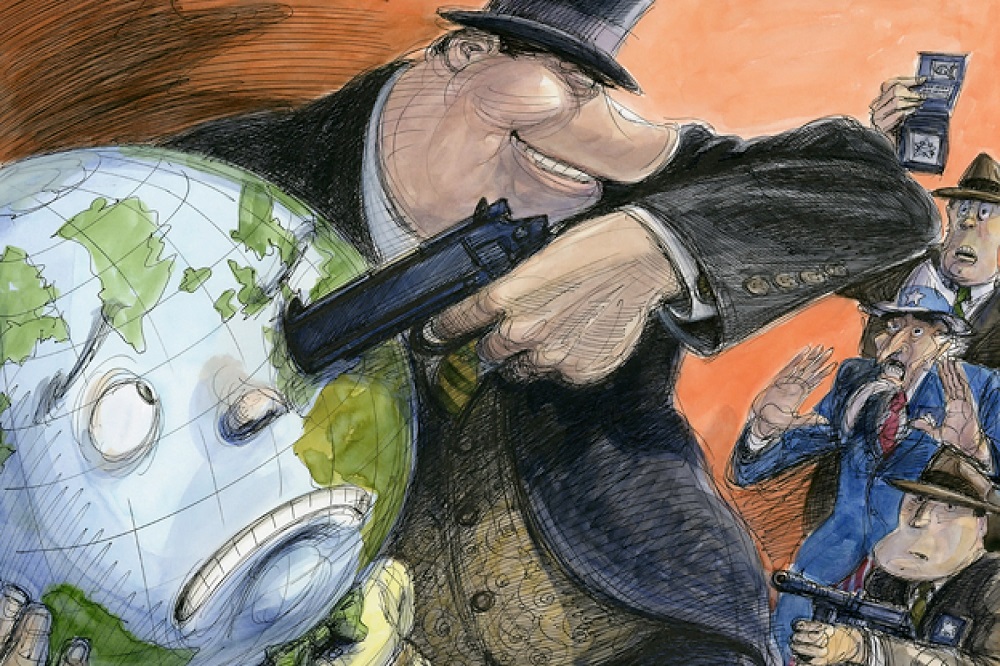 In recent economic news, headlines are being dominated by concerns over rising bond yields. Increased bond yields are a sign of a possible spike in inflation and, logically, they call for the Federal Reserve to raise interest rates in order to prevent that inflation.

Higher bond yields also mean there is a competitive alternative to stocks for investors – both factors that could trigger a plunge in the stock market.

If one studies the real history behind the stock market crash during the Great Depression, they will find that it was the Federal Reserve’s interest rate hikes that caused and prolonged the disaster after they had created an environment of cheap and easy money throughout the 1920s. Former Chairman Ben Bernanke openly admitted the Fed was responsible back in 2002 in a speech honoring Milton Friedman. He stated:

“In short, according to Friedman and Schwartz, because of institutional changes and misguided doctrines, the banking panics of the Great Contraction were much more severe and widespread than would have normally occurred during a downturn. Let me end my talk by abusing slightly my status as an official representative of the Federal Reserve. I would like to say to Milton and Anna: Regarding the Great Depression. You’re right, we did it. We’re very sorry. But thanks to you, we won’t do it again.”

This then raises the question – inflation or deflation? Will the Fed “do it again?”

Probably not in exactly the same way, but we will see elements of both inflation and deflation soon in the form of stagflation.

It’s a Catch-22 that the central bank has created, and many (including myself) believe that the Fed has created the conundrum deliberately. All central banks are tied together by the Bank for International Settlements (BIS) and the BIS is a globalist institution through and through. The globalist agenda seeks to trigger what they call the “Great Reset,” a complete reformation of the global economy and capitalism into a single one world socialist system… managed by the globalists themselves, of course.

In my view the Fed has always been a kind of institutional suicide bomber; its job is to self-destruct at the right moment and take the U.S. economy down with it, all in the name of spreading its cult-like globalist ideology.

The only unknown at this point is how they will go about their sabotage. Will the central bank continue to allow inflation to explode the cost of living in the U.S., or will they intervene with higher interest rates and allow stock markets to crash?

Either way, we face a serious economic crisis in the near future.

Mainstream economists will often argue that rising yields and inflation are a “good thing.” They claim this is a sign of rapid economic recovery. I disagree.

If “inflation” was the same as “recovery,” then there would not have been total economic collapses in Argentina in 2002, in Yugoslavia in 1994, or in Weimar Germany in the early 1920s.

I do not see recovery. What I see is the rapid devaluation of the dollar’s buying power due to massive fiat printing through stimulus measures. The Fed and the U.S. government are buying a short-term surge in economic activity, but at a hidden cost. This is a condition that the Dollar Index does not even begin to address, but obvious in prices of necessary goods and commodities.

Keep in mind that all of this is being done in the name of responding to the pandemic. The pandemic is the ultimate excuse for the active destruction of the U.S. economy. Stimulus measures have devolved into helicopter money being thrown about haphazardly as billions are siphoned primarily by major corporations and through fraud. People who are clamoring for a $2,000 relief check from the government have no idea that corporate welfare has been ongoing for the past year along with billions in retroactive tax refunds. All of that money printing is going to cause damage somewhere. It cannot be avoided.

It’s Not About The Pandemic

Let’s make something clear first: The pandemic is NOT the reason for the stimulus flood. The pandemic did very little to hurt actual business in the U.S. Rather, it was the lockdowns that did most of the damage.

Think about that for a moment – federal and state governments crushed the economy through lockdowns, then offered the solution of vast stimulus measures. This in turn is destroying financial stability and generating rapid price inflation.

Conservative states and counties that refused to shut down are recovering at a much faster pace than leftist states which imposed draconian restrictions on citizens. Yet, the lockdowns did nothing to stop the spread of COVID-19 in blue states. So, the lockdowns accomplished no discernible advantage for the public, but they did give the central bank a perfect rationale to further erode the dollar.

This resulting price inflation is something that not even the red states can escape.

For example, home prices are rapidly expanding beyond the market bubble of 2006. This is partially due to millions of people participating in perhaps the largest migration in the U.S. since the Great Depression. Anyone who is able is moving away from major cities into suburban and rural areas. But, home prices also have a historic habit of inflating along with currency devaluation. The cost of maintaining and remodeling an older home, or building a new home, rises as the prices of commodities like lumber inflate.

Home rentals also do not escape inflation, as the rising cost of maintaining properties forces landlords to increase rents. The only places where rents are decreasing are major cities that Americans are seeking to flee, such as New York and San Francisco.

Inflation In More Than Just Housing

The majority of commodities continue to see price inflation across the board. Food and energy prices have been creeping higher for the past year. Governments are once again blaming the pandemic and “stresses on the supply chain,” which may have been a believable claim nine months ago, but not today. Anything to hide the fact that all that stimulus has inflationary consequences.

Dollar devaluation is the most visible in terms of imported goods. In other words, it costs more dollars to buy goods outside the U.S. as the value of the dollar falls. And since the majority of U.S. retail is supplied by foreign producers, this means that average American consumers will suffer the brunt of inflationary consequences. Public stress and anger will be high.

Pandemic Lockdowns Are Just An Excuse

This is why the COVID-19 lockdowns must continue and the pandemic fear factory must remain active. The globalists need a cover event for the Reset and they need to keep the citizenry under control, and the pandemic can be blamed for just about anything. I think this is why we are already seeing the media hyping the existence of “COVID mutations.” Do not be surprised if the Biden Administration tries to implement a national lockdown sometime this year in the name of stopping the spread of a “more deadly” COVID-19 variant.

It won’t matter that the previous lockdowns were useless and all the data shows that keeping the economy open is a superior policy. It might seem like logic is going completely out the window, but there is a very logical reason for what is happening in the minds of globalists.

Stagflation comes into play through losses in certain sectors of the economy, high unemployment and the inability of wages to keep up with costs.

This may be why Democrats are so adamant about raising the federal minimum wage to $15 an hour. Wages are already rising according to market demand and region. The average non-skilled worker in the U.S. is making around $11 an hour. There is no need for the government to interfere, unless they have ulterior motives.

A $15 minimum wage would likely crush what’s left of small businesses, and only corporations that are receiving the bulk of stimulus dollars will be able to afford to pay workers the higher rate. On top of that, years from now the government could claim they “took action” to front-run stagflation by increasing people’s pay. But a $15 minimum wage is most useful to the establishment in the short term because it muddies the waters on the inflation issue.

Prices will continue to rise due to dollar devaluation, but the media and government will say that it has nothing to do with the dollar and everything to do with companies raising shelf prices to offset increased labor costs.

The Biggest Threat In The History Of American Society

I suspect that the establishment will do everything in its power to distract the public from the biggest threat in the history of American society – the stagflationary time bomb.

If they admit to its existence then the public could prepare for it, and they don’t want that. If Americans were to decentralize their local economies, support local small businesses instead of big box retailers, start producing necessities for themselves, and if they started developing currency alternatives like local scrip backed by commodities… then they would be able to survive a national financial crisis.

In fact, I guarantee that any community, county or state that takes these steps will immediately be targeted by the federal government, further revealing the truth: The establishment wants the public to suffer.

They want economic disaster. They do not want people to have the option of taking care of themselves. They need people scared, desperate and malleable, or they will never achieve their Reset agenda.