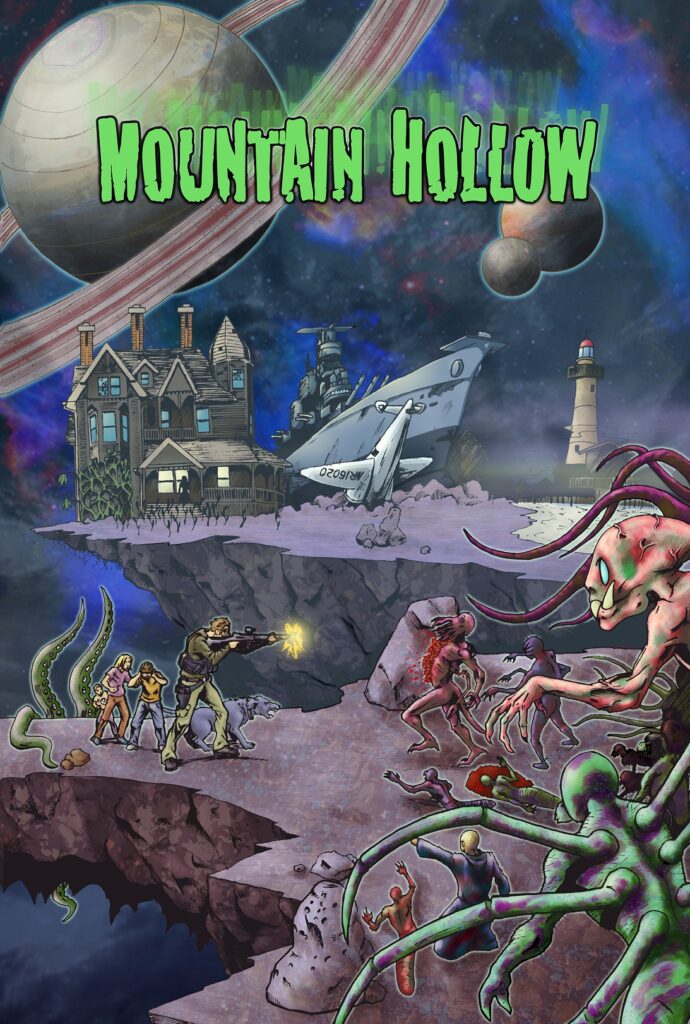 You might recall I recently posted an announcement about a graphic novel project I have been working on for a few months. Well, I said it was launching soon and now the day is here, but I need your help.

The campaign is posted on a crowdfunding website called Indiegogo, and the way Indiegogo works, the more people that back a project in the first few days the higher it goes in the listings and the more chances it will have to be successful. The more backers I can get at launch, the better. Check out the link to my campaign for Mountain Hollow HERE.

A Description of the story is below:

A small rural town is suffering from a series of child disappearances and bizarre events. The community is in slow decay and town officials are doing nothing to help. Little does the community know these disappearances are connected to a much larger cosmic conspiracy involving an inhuman threat. It’s up to an adept survivalist with a mysterious past to uncover the plot and even climb into the depths of hell to stop it.

SUMMARY:  Something weird is going on in the town of Mountain Hollow and the surrounding wilds known as the Cambridge Triangle.  Alan Jung, a new resident to the area, is trying to warn the locals but no one will listen.  After a baby is taken from her mother by an unknown assailant, Alan uses his military training and woodsman skills to track the kidnapper down, but the incident is much bigger than he could have possibly imagined.

His interference sets off a chain of events that lead to more kidnappings and, ultimately, open war against a cosmic presence.  And, in the true spirit of the survival creed, Alan knows that sometimes when a threat arrives on your doorstep you can’t wait around for the “authorities” to solve the problem for you.  Sometimes, you have to take care of things yourself.

The fight will put Alan and his faithful hound dog Ranger in the crosshairs of mad scientists, a Mexican crime cartel, corrupt FBI officials, a silent conspiracy and a horde of vicious interdimensional entities, sending man and hound into deadly wild forests, across outer space and into a nether-realm of endless horrors in a desperate search for the lost children of Mountain Hollow.

If you would like to support this campaign and get a great graphic novel in return, go to the top of the campaign page and click “SEE OPTIONS.” A perk option will pop up for the Mountain Hollow Chapter 1 graphic novel for $25 (there will be a small charge for shipping). For now, the physical comic will only be shipping in the US (There is also a digital version available to purchase for anyone outside the US). We will need 1000 backers in 30 days in order to print this graphic novel.   Be sure to check out the pages I have already finished and posted to the campaign; let me know what you think about them.

Remember, the more backers Mountain Hollow gets early, the better the campaign will do in the long run. With your help I think this could be a successful campaign with many more comics to come in the future.