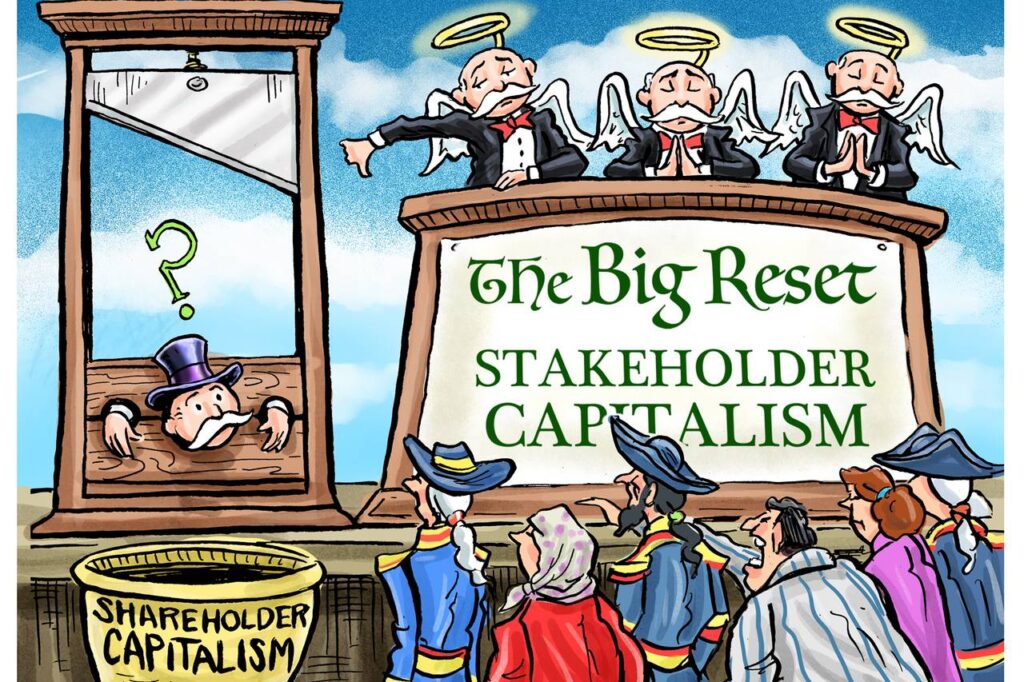 The concept of “fascism” was originally entered into the Encyclopedia Italiana by Italian philosopher Giovanni Gentile, who stated that “Fascism should more appropriately be called corporatism because it is a merger of state and corporate power.” Benito Mussolini would later take credit for the quote as if he had written it himself, but it’s important to note because it outlines the primary purpose of the ideology rather than simply throwing the label around at people we don’t like as a dishonest means to undermine their legitimacy.

Despite the fact that leftists today often attack conservatives as “fascists” because of our desire to protect national boundaries and western heritage, the truth is that all fascism is deeply rooted in leftist philosophies and thinkers.

Mussolini was a long time socialist, a member of the party who greatly admired Karl Marx. He deviated from the socialists over their desire to remain neutral during WWI, and went on to champion a combination of socialism and nationalism, what we now know as fascism. Adolph Hitler was also a socialist and admirer of Karl Marx, much like Mussolini. It is actually hard to find where Marx, the communists and the fascists actually differ from each other – A deeper sense of nationalism seems to be one of the few points of contention.

Though Marx saw the existence of nation states as temporary to the proletariat and to the ruling class, he noted that the industrialists were erasing national boundaries anyway. Marx argues in the Communist Manifesto with some optimism:

“National differences and antagonisms between peoples are already tending to disappear more and more, owing to the development of the bourgeoisie, the growth of free trade and a world market, and the increasing uniformity of industrial processes and of corresponding conditions of life.”

Marx saw the development of corporate power as useful and the next necessary step towards socialism, noting that joint-stock companies (corporations) and the credit system are:

In other words, corporations are viewed as a tool for the eventual transition to a socialist “Utopia” and the death of free markets. Once again, we see there is very little difference in motive between the political left and the fascists. The natural progression of every form of Marxism, communism, socialism, fascism etc. all ultimately lead to a kind of globalist ideology and erasure of cultural separation. The methods might differ slightly but the end result is the same. Some think this is a good thing, but it is actually quite poisonous.

Globalism requires an overarching social dynamic, a single hive mind, otherwise it cannot survive. If people have the ability to choose or create better options (or different options) for living then globalism loses significance. The existence of choice has to be erased. This is a behavior that the political left has fully embraced and they are more than happy to work hand-in-hand with corporate oligarchs to make their ideal system a reality. Long gone are the days of the anti-corporate progressive – They LOVE corporate dominance, but only if those companies promote and enforce leftist models for society.

Mussolini’s fascism is at the root of the very corporate governance that leftists applaud and lust after today. They have far more in common with fascists than they realize.

The new fascism is a re-branded philosophy best represented by something called “Stakeholder Capitalism.” It is a term often used by globalists at the World Economic Forum and the head of the WEF, Klaus Schwab. The media friendly definition of Stakeholder Capitalism is:

A form of capitalism in which companies do not only optimize short-term profits for shareholders, but seek long term value creation, by taking into account the needs of all their stakeholders, and society at large.

But who are “all stakeholders” in the opinion of the WEF?

Well, according to Klaus Schwab they are all of human civilization, now and in the future. In other words, the goal of SHC is for corporate leaders and globalist bureaucracy to take responsibility for the entire world, not just their own employees, shareholders and profits. And such leaders would not be acting as individuals, they would be acting as a collective. In other words, SHC requires all major corporations to act as a single unit with a single purpose and a unified collectivist ideology – An ideological monopoly.

“The most important characteristic of the stakeholder model today is that the stakes of our system are now more clearly global. Economies, societies, and the environment are more closely linked to each other now than 50 years ago. The model we present here is therefore fundamentally global in nature, and the two primary stakeholders are as well.

…What was once seen as externalities in national economic policy making and individual corporate decision making will now need to be incorporated or internalized in the operations of every government, company, community, and individual. The planet is thus the center of the global economic system, and its health should be optimized in the decisions made by all other stakeholders.”

The SHC concept is deceptive on its very face because it pretends as if corporations will be held accountable by the public within some form of “business democracy,” as if the public will have a vote on what the corporations do. In reality, it will be corporations telling the public what is acceptable to think and do and corporations in conjunction with governments using their power to punish people who do not agree.

The great magic trick is that these same unified corporations use the shield of “private property” and business rights as a means to control society without repercussions. After all, a primary principle of conservatism and the US constitution is private property rights. So, stepping in to disrupt corporate governance would be violating one of our own beloved ideals. It sounds like a Catch-22, but it’s really not.

As mentioned above, corporations are at their very core a socialist concept: They are created through government charter, handed legal personhood and given special protections from government. They are NOT free market entities, and Adam Smith, the originator of most free market ideals, stood against corporations as destructive and prone to monopoly.

As long as they receive protections from government including monetary stimulus and bailouts, corporations should not enjoy the same private property protections as regular businesses do. They are parasitic creations, alien to the natural business world. In a freedom-based society they would be dismantled to prevent authoritarian outcomes.

Stakeholder Capitalism is also an incredibly arrogant premise because it assumes that corporate leaders have the wisdom or objective intelligence to expand their role beyond business and into social and political spheres. This has already happened in many respects with much chaos created, but open corporate governance is the end game and it is anything but objective or benevolent.

What are some examples of this kind of corporate/political governance (fascism) in action?

How about Big Tech social media censorship leaning HEAVILY against conservatives and liberty activists? How about evidence of collusion between Big Tech companies and government, such as the Biden Administration and the DHS working closely with Twitter and Facebook to actively remove voices and viewpoints they don’t like? How about corporate leaders colluding to destroy conservative based social media competitors like Parler?

How about ESG loans funded by corporate backers such as Blackrock or globalist non-profits like the Rockefeller Foundation?

If all corporate lenders applied ESG to their loan practices, all individuals and businesses would have to adopt leftist social ideologies and dubious environmental claims in order to have access to credit. ESG is a monetary incentive created by corporate elites to keep all other businesses in line. If it continues, ESG could wipe out political opposition to globalism in the span of a single generation.

And, what about the Council For Inclusive Capitalism? This is the most blatant expression of open global fascism I have ever seen, with money elites and politicians working in concert with the UN and even religious leaders like Pope Francis. Their goal is to institute a single centralized world governing platform built around the same agendas outlined in ESG and SHC, making corporations members of a new global council which they refer to as “The Guardians.” They aren’t even trying to hide the conspiracy anymore, it’s right out in the open.

Klaus Schwab takes special care to mention often that global crisis events are the “opportunity” that is needed to push the public into the arms of Stakeholder Capitalism through a nexus point called “The Great Reset.” Meaning, he thinks that widespread fear and desperation must exist (or be engineered) to perpetuate the SHC framework quickly.

Obviously, the globalists are on a shrinking timeline, though it’s hard to say why. They are tearing off the mask faster in the past two years than they have in the previous decade. More than likely they understand to some degree that if they go too slow the public will have time to mount a defense against them.